Handprints In The Hallway: How Disney Connects Employees To Something Bigger

Home/Blog Posts/Handprints In The Hallway: How Disney Connects Employees To Something Bigger 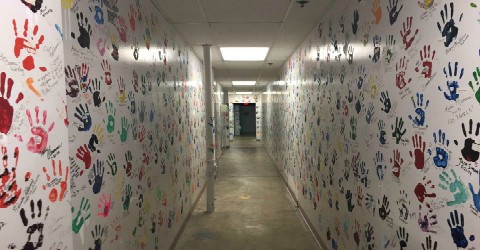 One of the backstage areas at The Great Movie Ride attraction at Disney’s Hollywood Studios.

Think back to all of the former jobs you’ve held and the places you’ve worked. If any of them were to go out of business or close their doors for good, would you feel a deep sense of sadness or profound loss?

If you’re like most of us, the answer is probably no.

Nowadays, people change jobs frequently. It’s not like it was when our parents or grandparents worked at a company for 40 years and then got a gold watch when they retired. Now, most of us work at a job for a few years (sometimes longer) before moving on to the next opportunity. We might stay in touch with a few close friends, but it’s rare that the places we work mean more than just a way we make our living.

But then there are those special places that connect to our hearts. The places that make us feel like we belong there even though we may have stopped working there years ago.

Farewell To The Great Movie Ride

Have you been on The Great Movie Ride? Located at the Disney’s Hollywood Studios Theme Park in a replica of the famous Chinese Theater, The Great Movie Ride opened in 1989 and quickly became a signature Disney attraction. It was a 25-minute ride through some of the most famous movie scenes in history and it was definitely a guest and employee favorite.

But recently, it closed its doors for good. Ready to make way for something new.

When news of its closing spread among the special “alumni” club of former Disney cast members, many were heartbroken.

You see, the cast members that worked at the Great Movie Ride over the years had a special reason to be sad when their old workplace closed.

Many of the past and present cast members who worked there had left their mark.

Their handprints cover every square inch of the backstage hallways at this beloved attraction.

It all started shortly after the Great Movie Ride opened nearly 30 years ago. As cast members completed training, they began leaving their handprints on the walls backstage as sort of a rite of passage.

It was a simple yet powerful way to connect these cast members to one another and to the Disney attraction that brought them together. It was a brotherhood of sorts. And although it isn’t unique to this attraction (several of the Disney hotels have similar cast handprint hallways), it’s a very powerful way to instill a sense of belonging – a sense of “WE” between and among the cast members charged with delivering excellent guest experiences.

From Handprints to Disney’s Legendary Leaders

Another way Disney connects cast members to one another in a collective “WE” is by reminding them of the legendary leaders that helped shape the most magical company on earth.

These are some of the legendary leaders of the Disney organization which can be found on the windows and storefronts in each of the Magic Kingdoms at parks around the world. New Disney cast members learn about these people who came before them and about the role each of them played in shaping Disney history and culture. It’s a subtle, yet powerful way to connect current and future employees to the rich legacy of the Disney organization.

Many years ago, I remember meeting with the CEO of Florida Hospital Altamonte here in Central Florida. He told me that after New Employee Orientation, trainers would bring new employees to meet him. He took that opportunity to tell them that the mission of Florida Hospital Altamonte was to ‘extend the healing ministry of Jesus Christ.’ And then he challenged each new employee by saying, “If you agree with that mission, will you sign my wall?”

That became a powerful moment for these new employees!

From that moment on, every employee – regardless of personal religious traditions – was committed to fulfilling the mission of that hospital in service to their patients and their community.

There are other things we can do, too. Consider your exam rooms, meeting rooms, or general gathering areas. What are they called? “Exam Room 12”? “Patient Waiting Area”? Why not take the opportunity to honor your legendary leaders in the same way Disney does and name your rooms after them? If the Sisters of Mercy helped found your hospital, could you name a room or an area after them? Be sure to include a plaque or something in the room that honors them and explains to employees and visitors exactly how the room got its name.

These little things serve as connectors. They help patients and visitors understand a bit more about your mission and what you value. And they create a bond with employees that can foster pride, meaning, and a connection to a greater “WE.”

You may not be able to do the handprints in the hallways like the Great Movie Ride, but there are lots of ways to create an environment that leaves a lasting impression where former employees can reflect back and think, “Wow, I was really lucky to work there.”