How Disney Preserves The Guest Experience 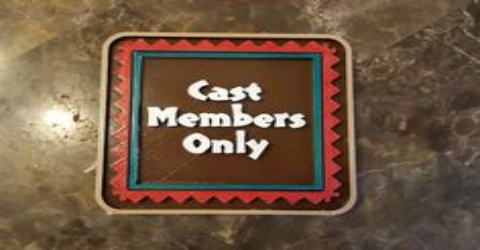 Most people are aware that Disney has backstage areas where their cast members (employees) and character entertainers go when they’re not “on stage.” This is where cast members eat, use the restroom, smoke, and change out of their costume at the end of their shift. There are doors and walkways which are slightly hidden and out of sight to guests so cast members can slip effortlessly backstage when needed.

But what about the backstage areas that might be somewhat visible to guests while they’re enjoying the theme park?

The Walt Disney World Disney Railroad is a great example of a ride that has some points along its path which are a little tricky to camouflage. The open-air train runs on a track which follows the perimeter of the Magic Kingdom park. Since the train travels behind several buildings and attractions, there are a few parts of the ride that reveal backstage or non-theme park areas. Disney considers this to be a disrupter to the ‘show’. So, to prevent guests from being distracted, Disney uses camouflage in the form of trees, shrubs, and bushes to hide these areas. But, they also use another technique, which is effective at positively distracting guests from looking out the entire left side of the train.

The area directly behind one of the most popular attractions – Splash Mountain – is a roadway for backstage vehicles (i.e. garbage trucks, delivery vehicles, parade floats, emergency vehicles, etc.). And it’s one of the destinations along which the Disney Railroad travels. Although there are a few trees that serve as a visual barrier, many of these backstage areas are still visible – but only looking out the left side of the train. This can easily distract guests from enjoying the “show” that Disney has created.

So the challenge was to get guests to look to the right of the train for those fifteen seconds or so as the train passes by.

Rather than build a wall or install more trees, Disney created a special show under the Splash Mountain attraction which is visible only to guests riding the train. It’s a vibrant display of singing and dancing robotic characters from the Splash Mountain attraction, and it’s all located entirely off to the right side of the train, which entices guests to turn their heads away from the backstage areas and instead, pay attention to the show. This little show serves to positively distract guests away from the backstage areas and instead delight them with some unexpected entertainment as they ride.

Now think about your hospital or healthcare system. Most of us grow accustomed to our work environment and we don’t always notice things like bins of dirty laundry in the halls of a hospital or an employee taking her break on the other side of a patient exam room in a physician’s practice.

What areas in your hospital or care facility should really be out of patients’ sight? And now that you’ve identified them, how can you camouflage these areas creatively and cost-efficiently so you preserve the patient experience?