A True (and positive!) Lost and Found Story 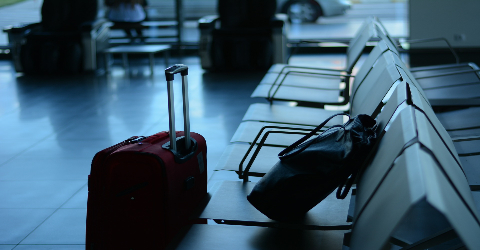 There are just certain places where if you lose something you can pretty much assume it’s lost forever. A shopping mall. The ball pit at a kid’s playplace. New York City.

But what about the airport?

Think of the hundreds, no thousands, of people that travel through most any airport on a given day, especially busy airports like the one I travel through the most often: Orlando International Airport. Is there any hope to finding even the smallest of items in this busy hub of frenzied travelers?

A True and positive Lost And Found Story

A few weeks ago, I was in a familiar place (Orlando International Airport) on my way out of town for business during one of our freakish summer afternoon thunderstorms. As I went through the TSA security stop I realized I’d forgotten to put my brand new wireless ear phones in my bag prior to sending it through the X-ray machine. So instead, I tucked them in with my extra laptop in the security bin. After I went through the metal detector, I went into auto pilot mode (as I fly 2-3 times per week). I grabbed my laptop, placed it in my briefcase, and hurried off to my gate.

Leaving my earbuds in the bin.

By the time I got to the gate, I remembered the ear buds, but we were now ready to board the plane.

Five days later, I returned to Orlando and I walked over to the airport lost and found with little hope of finding my earbuds. It was closed. Later at home, I went online and filled out the normal “lost and found” paperwork and wrote it off as a lost cause.

More than a week later, when I was back at the same airport for another business trip, I went to lost and found out of curiosity and a lingering sense of hope.

I smiled and said, “Well I’m hopeful, but I doubt it!”

To my astonishment, after asking a few clarifying questions, Tracy got up from her computer, went to one of many clear plastic bins and pulled out MY EAR BUDS and handed them to me! Wow! I couldn’t help but be impressed with her efficiency and the efficiency of their system. Consider how many thousands of articles must come in to lost and found every day. And then, think about the time it takes to log, store, and organize those items so Tracy or one of the other associates can find them so quickly. I was blown away that not only had my ear buds made it to lost and found but that she was able to retrieve them so quickly based on the information I gave her.

Now that is a well-oiled machine.

And it’s a great way to meet and exceed guest expectations.