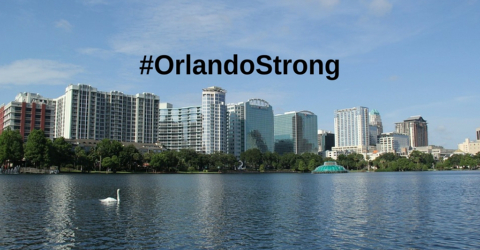 When a community has been pierced by tragedy, a tremendous sense of helplessness often arises. But there is also a hopefulness that shines through. A uniting spirit of neighbor helping neighbor. Strangers working together to rebuild their broken city. And, in these past 24 months, that’s just what happened in Orlando and in the Central Florida community.

In fact, if there’s anything good that’s come from this horrible, dark tragedy, perhaps it is how swiftly this community came together. A ray of hope struggling to shine through after such devastation and darkness. Like the bright yellow weed that makes its way through the cold, hard cracks of a concrete sidewalk, forcing itself to rise against all odds.

After 9/11, children’s television personality Mister Rogers said that when he was a young boy and he saw terrible images in the news, his mother would always encourage him to look for the helpers.

As an Orlando resident and business owner, I can tell you that over these last several months and especially in the hours and days immediately following the shooting, the helpers were hard to miss.

From the first police and emergency responders to arrive at the nightclub.

To nearby neighbors and business owners who rushed to the scene to help the injured.

To the ER team that triaged dozens of patients.

To the nurses, doctors, and surgeons that carried these people through the darkest time of their lives, all while delivering both hopeful and heart-wrenching news to anxious loved ones.

To the thousands of Central Floridians who, in the days immediately following the shooting, stood in the blistering heat in lines that wrapped around buildings, all to donate blood and help their neighbors.

These and so many more selfless efforts were and still are awe-inspiring and humbling.

My thoughts and prayers go out to the families of the victims and to the survivors, who will forever carry the memory of that horrible day. And I am so thankful for all of the first responders, especially the extraordinary team at Orlando Health, who prepared for events just like this. Every single member of that care team – both clinical and non-clinical – is a hero in my book.

I am proud of my city and the spirit of healing and resilience that has been so clearly demonstrated by so many in our community. As Orlando Mayor Buddy Dyer said last year, “I am so proud that we as a city haven’t been defined by hate. We have been defined by love and compassion.”

As our city continues to heal, here are some resources if you’re interested:

Tips for talking with your children about tragedy