A Lesson From Disney On How To Train Your Trainers 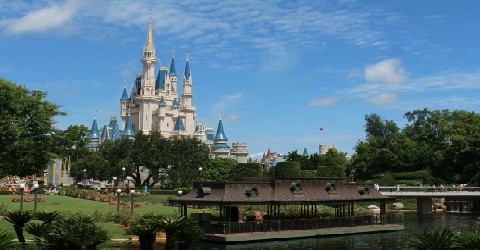 Disney has an ingenious technique for training their trainers and it’s somewhat of an insider’s secret. It works like a charm and it can work for you, too.

Teachers know the term “Anticipatory Set” as being a key component in effective lesson planning and lesson execution. Anticipatory Set is best defined as a brief portion of a lesson given at the very beginning to get the students’ attention and to pique their interest – in other words, it’s like a “hook” to get them ready to learn.

One of the most effective anticipatory set-types of experiences I’ve had occurred near the beginning of my career with Disney. I was in my early 20s and had worked in Guest Relations (the customer service equivalent in the theme parks and resorts) for a year or so before I was promoted to be a Disney Trainer.

As a trainer, I would be responsible for meeting new employees after they completed their corporate training, which at Disney lasts for about a week. My function would be to help localize the concepts they’d just learned so they could see what the Disney principles look like in their daily work environment.

But before I trained any new cast members, I had to go through a “Train the Trainers” workshop with about 40 other trainers from around the Walt Disney World Resort. I was told to dress in professional attire and arrive on time at the Disney University building and go to room “Mickey 201.”

The class would start, I was told, promptly at 8am.

At 7:45am, I arrived at the Disney University Training Center. I found a great parking spot and had time to grab a Diet Coke in the lobby before heading toward the meeting room, easily ten minutes early.

But when I tried to open the door, I discovered it was locked. No worries, I just grabbed a seat on the floor and decided to wait.

Other trainers-to-be arrived and joined me on the floor as we awaited our facilitator. Finally, at 8:15am (a full fifteen minutes after the meeting was supposed to have started), a disheveled man hurried down the hallway, briefcase in hand, tie not quite all the way around his neck.

He looked frazzled as he took a sip from a travel mug of coffee. He apologized, unlocked the door, and flipped on the lights.

We immediately noticed there were no tables and chairs set up. They were all against the wall. There was no coffee brewing or carafes of water, as there typically is in Disney meetings. No posters, signs, or props of any kind for this instructor’s training sessions. And to top it all off, the room was freezing.

We all kind of looked at each other and rolled our eyes. I suppose we were grateful for a day out of the usual busy theme park but we were bracing ourselves for what we were sure would now be a boring eight hours in an uncomfortable room with a trainer who was quite obviously unprepared.

Our trainer apologized again, put his coffee and briefcase down on the floor, and said he’d be right back. Apparently, he wanted to go get some help and some more supplies to get the room ready.

Unbelievably, we waited for another 10 minutes. Many of us debated out loud whether we should just leave.

The Magic Behind the Disappointment

The door opened and the trainer reappeared. He looked different. His tie was fixed and straight. He wore a business jacket with his name tag affixed at the top left of his jacket (over the heart), his hair was combed, and he had a warm smile. He said, “Ladies and gentlemen, please follow me this way…”

We gathered our things and followed him down the hall still frustrated and a little put off that for the millions of dollars that Disney makes they couldn’t invest a little bit of time to make this a pleasant experience for us.

He led us to a new room and the difference was striking. It felt like Dorothy had just walked out of her black and white house and into the colorful land of Oz. The room was brightly lit. The tables and chairs were set up and ready for new trainees. Soft Disney music was playing in the background. Coffee was brewing in the back and name plates were set up so we could find our seats easily.

Our trainer interrupted our stunned silence and asked us to shout out some words to describe what we felt and what we were thinking when we were in the other room. Frustrated. Annoyed. Mad.

He smiled and said, “Welcome to the Train the Trainers Workshop.”

He continued, “This is your first lesson: be prepared. First impressions matter. Be on time. Be ready to go. The most important thing to know when teaching others about the way we do things here at Disney is to model what we do here. It starts with you. Have a seat and let’s get started.”

Now we were ready to learn.