9/11 We Remember: There’s A Sacredness In Speaking Someone’s Name 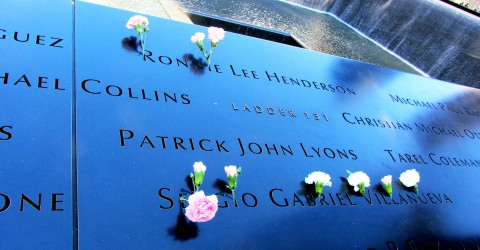 Several years ago while working at a college in upstate New York, I was invited to take part in a September 11th remembrance service. Following the public observance, which featured local fire and police as well as a few remarks from the college president, the remembrance continued in a quieter way in a number of smaller venues across the campus.

Our college drew inspiration from the remembrances held at the Twin Towers site, the Pentagon, and in Pennsylvania each year. Students and employees were invited to stand in hallways, stairwells, and library nooks across campus and quietly read aloud the names of those that perished in the terrorist attacks of 9/11.

I signed up for the 1-1:15 pm time slot and was positioned just outside the entrance to the library. As I glanced at the list of 60 names I’d been given, I noted there were a few additional sentences to read after each name. I quickly did the math and realized I’d have to read about four names per minute in order to fulfill my obligation.

I started out slowly, reading the first person’s name.
Jane Smith, age 32. Jane was a rising executive at Cantor Fitzgerald. Originally from Brooklyn, she attended SUNY Plattsburgh on a full scholarship. She was an avid concert-goer – her favorite artist was Bruce Springsteen. Jane loved dogs and had recently adopted a rescue beagle named Buster. She was engaged to be married this fall to her best friend and high school sweetheart, Chris.

Then, I read the next name.

By the fifth name, I realized my eyes were full. A lump ached in the back of my throat.

Suddenly those 60 names on a page had become real people. Real people who had woken up on that sunny, blue-sky September morning and went about their day as usual. And then, were gone in an instant.

In that moment, the reality of it all hit me. Quietly, I let my eyes spill over. The tears now streaming down my cheeks, I continued reading, offering up a silent prayer of thanks that there was no real audience watching me.

Most people know that nearly 3,000 people died on that awful day. But the act of reading their names one by one somehow made it more … real.

Journalists report the numbers of the dead and sometimes the number is so overwhelming that it doesn’t seem real. In fact, the numbers often seem so implausible that our senses and our brains glaze over and simply cannot process it. But when we stop and look at each individual number, each name, we see the human life behind the number.

In that tiny time slot, I learned a little bit about 60 of the people that died that day. I thought about them and I prayed for them. Their stories may have only been shared in that moment by a witness of one (and to anyone that walked past me), but their names were spoken and honored.

That day, I learned the power of a name and how it can instantly connect us as human beings, especially in times of tragedy and suffering. I was humbled to participate in this remembrance ceremony because I was fortunate to bear witness to something holy and sacred.