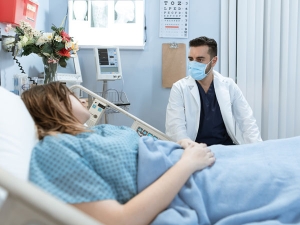 Years ago, a family visited the Magic Kingdom with their two young daughters. It was a busy day and they waited in a long line to meet their favorite princess, Snow White. When they finally got to the front of the line, they told their names, took some pictures and even got her autograph. Hours later, during the three o’clock parade, the girls spotted Snow White on one of the parade floats. To their amazement, she saw them and called them by name! Thousands of people visit the Magic Kingdom every day and yet Snow White remembered their names.

To the patient, the sound of their own name is music to their ears! And we don’t mean the formal, legal name on their medical record. Although that may be suitable, don’t assume it’s what the patient prefers to be called.

So how will you know what name to use? Just ask them! And then: Use it. Write it in a highly visible space (on a white board, in the electronic medical record, in patient notes, etc.), so that everyone on the healthcare team sees it and uses it.

Leaders in healthcare have to get everyone to understand they have a role on the care team. The names of the patient and their family members are not just for nurses and doctors, they’re also important for housekeeping, transporters, security officers and volunteers. Many people do not have access to the electronic medical records.

Since the introduction of the HIPAA law, we have been very reluctant to put the patient’s name on the outside of the door out of concern for their privacy and confidentiality. However, what does the patient want? At some children’s hospitals, kids are allowed to decorate a poster for the door of their hospital room, complete with pictures and the name they want to be called.

For the complete lesson, check out our virtual 99 lessons.